ava
Florence, Italy, September 18, 2018 – Japan and Argentina played for the last ticket to the next round – as Argentina needed to win two sets ‘only’ to make it to the next stage of the FIVB Volleyball Men’s World Championship while Japan were vying for a three-point victory to achieve the same feat. After 2 hours and 20 minutes of pure drama, Japan edged the South Americans 3-2 courtesy of a terrific performance of Yuji Nishida who scored 30 points, well supported by Japan’s amazing defence game. As for Argentina, Facundo Conte was by far their most prolific player with a total of 33 points.

Argentina edged ahead 8-5 at the first technical timeout of the opening set. A single block by Nishida and a great defence by Tatsuya Fukuzawa followed by a block-out by Satoshi Tsuiki made it 12-11 for Japan. Conte levelled the score at 14 and served for times in a row as Argentina stormed back to lead 18-16. The left-handed Nishida brought Japan back to 19-20 before the Japanese team claimed the first set 26-24.

Conte was just superb in the second set, killing seven out of seven attempts in attack. Argentinean libero Alexis Gonzalez used his knees, feet and even chest to keep the ball in play. Conte sealed the set 25-20 with an attack that the Japanese block could only touch and not stop.

Japan claimed an early lead in the third set before Velasco changed Maximiliano Cavanna and José Luis Gonzalez for Luciano De Cecco and Bruno Lima. Argentina fought back before Japanese libero Taichiro Koga suffered a neck injury in a spectacular defence action which saw him flying over the LED boards. Japan cancelled four set points for Argentina but wasted two of their own. Cristian Poglajen eventually finished this set at 32-30 with Conte scoring as many as 12 points of his own. At this stage, Argentina had qualified for the next stage of the tournament.

The fourth set was especially important for Argentina to secure a three-point victory, which would come in handy for the second round. The two teams played point by point until four serves in a row by Japan captain Masahiro Yanagida, including two aces, made it 2-2.

The third tiebreak in Pool A started with Japan running away 3-1 and Argentina trying to come back with blocks and fast attacks. Japan had a 9-7 lead but Argentina was back in control for 12-10 with a spike by Conte. Yuki Ishikawa levelled the score before Yanagida served a lucky ace. Fukuzawa blocked the last Argentinean counterattack for 15-13 and a 3-2 victory.

Even if they lost, the Japanese players delivered a very solid performance and can leave the tournament with their heads held high. 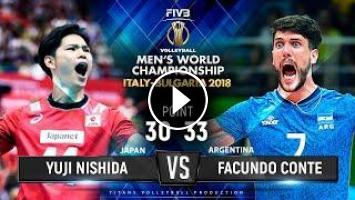 Florence, Italy, September 18, 2018 – Japan and Argentina played for the last ticket to the next round – as Argentina needed to win two sets ‘only’ to...