A brilliant scoring performance by Wallace de Souza who bagged 22 points after attacking for 58% (18/31) and adding three blocks and an ace was key to Brazil's convincing win that boosts the confidence of the South Americans who next head out to defend their Olympic title at Tokyo.

Poland made a break to turn a 5-6 deficit into an 8-6 advantage after a great dig by Kurek followed by a kill by Michal Kubiak plus an attack gone long by Lucas Saatkamp. Poland carried the lead into the second technical time out, but immediately after that back-to-back kills by Wallace de Souza brought Brazil level again.

But then Wilfredo Leon rotated to serve, sending a direct ace on libero Thales Hoss, and Kubiak blocked Wallace in the very next rally taking Poland to 23-20. All they had to do was sideout twice (on kills by Kurek) and the set was theirs.

A series of great digs by Fabian Drzyzga, Mateusz Bieniek and Leon, with kills by Kubiak and Kurek turned the set into a rollercoaster, tying the score at 18-18.

Douglas Souza was called in to replace Wallace - just for one point - putting an end to Poland's five-point run with a kill for the sideout, as Brazil recovered and once again shot off to a three-point lead for 21-18. They kept Poland at bay and reached set point with two to spare - Leon sending the last on the net.
By now, Brazil had built momentum. They went into the first technical timeout of the third set with a lead of two and never looked back, gradually widening the gap to stop at an impressive +9 as Mauricio blocked the Poles three times and Wallace got six kills from nine swings in this set alone.

Poland seemed spent as they went into the fourth and Brazil were already on a roll, taking the very first point and never once falling behind as they continued to extend their lead.

A 7-1 run from 15-12 brought Brazil beyond the reach of Poland - and by then it was just procedural. Brazil got a sideout for their 23rd point when Kubiak served on the net, Lucas Saatkamp served an ace on Leon and Bruno Rezende made the final dig before, very fittingly, Wallace delivered the last kill.
It was Brazil's first medal in the history of the VNL, after twice losing in the bronze medal match.

For Poland it is their second medal, after their bronze in 2019 when they beat Brazil in the third-place playoff.

Earlier on Sunday France had snatched the bronze medal with a sweep of Slovenia. 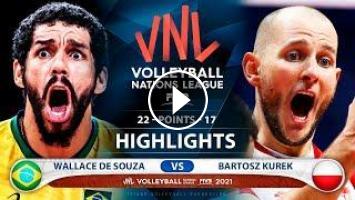