· Slovenia had won the first world level encounter with Netherlands, 3-0 in the 2017 World League.

· Slovenia also won the most recent match against Netherlands at the European Championship, 3-0 in 2015.

· Netherlands are among the four teams (alongside Argentina, Australia and Italy) to have lost each of their three matches in the opening week of the 2021 Volleyball Nations League. Netherlands were beaten 3-0 by Iran on Sunday, following losses versus Russia (3-1) and Japan (3-2 after a 2-0 lead).

· Netherlands have not lost their opening four matches of a world level tournament since the 2000 World League. They lost their first five matches in that edition.

· Netherlands have now lost each of their last five World League/VNL matches, since a 3-1 win against Czech Republic on 18 June 2017.

· Netherlands eye their first victory at a major world level tournament since 22 September 2018, when they beat Finland 3-1 in the second round of the 2018 World Championships.

· Nimir Abdel-Aziz won 65 points in the 2021 VNL, only trailing Russia's Maksim Mikhaylov (69) for most in the competition. This is the sixth selection for Abdel-Aziz in the World League/VNL.

· Debutants Slovenia come off wins against Italy (3-0) and Poland (3-1), after they had lost their opening match of the 2021 Volleyball Nations League (3-1 versus Serbia).

· Slovenia could win three successive matches at a major world level tournament, for the first time since winning their three matches in the 2018 World Championships first round.

· Toncek Štern (14) was Slovenia's leading points scorer in their win over Poland. He was included in Slovenia's team for both the 2016 and 2017 World League. 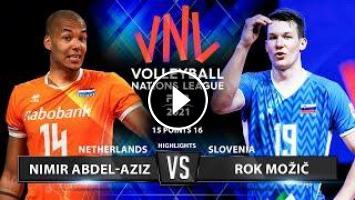