He is NOT HUMAN!!! | Dmitriy Muserskiy | 219cm Tall Volleyball Giant

Muserskiy started playing volleyball at the age of 8 under the guidance of Boris Osnach. In 2006 Muserskiy defended the colors of the junior national team. On the 4th of June, 2010, in Yekaterinburg, in his first match for the Russia national team against rivals from the United States in the FIVB World League Muserskiy scored 13 points and became the best scorer of the Russian team that day. Musersky in 2011 with Russian national team won the World League, also won the prize for the Best on the Pitch, and the World Cup. He won Olympic Games London 2012 and World League 2013 and European Championship 2013.

He is NOT HUMAN!!! | Dmitriy Muserskiy | 219cm Tall Volleyball Giant 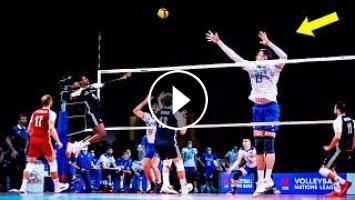