Ajoutées 2 semaines by admin
21 Vues
The BMW M3 CSL (the 2003 E46 3 Series, code-name fans) is widely regarded as one of the greatest BMW M cars, like, evs. We think so too, as you can see in our mega Autocar Heroes triple test (linked below) where we pitch it alongside an M2 Competition and an E30 M3.
But it was hampered by one thing: its SMG robotised manual gearbox.
Now, one engineer and a specialist from 'Everything M3s' in Banbury, UK, has sought to set things right, by making an M3 CSL SMG to manual conversion - and offering it for sale.
How does it change BMW's legendary, if flawed, gem?
New videos are uploaded to Autocar each week. Don't miss a single one. Subscribe now:
Watch next:
How to drift! Pro drifting secrets
World's Fastest Tractor! Technical walkaround and TEST of 1000bhp JCB Fastrac
1,000 miles in the new McLaren GT - European Road Test
Visit our website at
Autocar, the world's leading motoring magazine and website, delivers industry-leading news, the most in-depth car reviews and opinion from our team of experts. Our presenters include some of the world's top motoring journalists who have unrivalled access to the world's fastest, rarest, most exotic and most exciting cars on some of the world's best roads and race tracks.
Follow AUTOCAR here:
LIKE Autocar on Facebook:
FOLLOW Autocar on Twitter:
FOLLOW Autocar on Instagram:
Check out our full video catalog:
For car reviews you can trust, subscribe to Autocar: 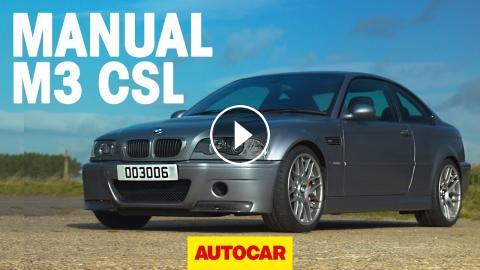