Career
Clubs
In 2010 he started playing for Minas Tênis Clube. In 2013 he signed a contract with SESI São Paulo, and in 2015 he was hired by the club Funvic Taubaté.

National team
The young Lucarelli defended the junior national team in 2010, when won the gold medal in the South American Championship .In the next year, he was on the group that finished fifth in the World Championship. In 2013 Lucarelli won the World Grand Champions Cup, a gold medal at the South American Championship and a silver medal at the World League, where he was named the Best Outside Spiker (together with Ivan Zaytsev). In 2014 he was a major player in Brazilian team, which won the silver medal at the World League 2014 in Florence, Italy. He was again named the Best Outside Spiker, together with teammate Murilo Endres. Lucarelli one of the starts in the Bernardinho team, Lucarelli was in the court in all the games of FIVB World League and the conquest of the South American Games in 2015. In the special year of 2016, Lucarelli was a key player in the gold medal campaign in the Rio Olympic Game. Lucarelli was part of the team that won the gold medal at the 2016 Olympic Games in Rio de Janeiro. He played the last three games, against Argentina (quarterfinals), Russia (semifinals) and Italy (finals). 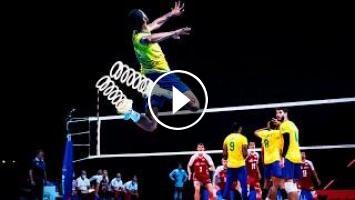