CLIP DESCRIPTION:
Maria (Julie Andrews) sings out "The Sound of Music" to the mountains of Austria.

FILM DESCRIPTION:
One of the most popular movie musicals of all time, The Sound of Music is based on the true story of the Trapp Family Singers. Julie Andrews stars as Maria, a young nun in an Austrian convent who regularly misses her morning prayers because she enjoys going to the hills to sing the title song. Deciding that Maria needs to learn something about the real world before she can take her vows, the Mother Superior (Peggy Wood) sends her off to be governess for the children of the widowed Captain Von Trapp (Christopher Plummer). Arriving at the Trapp home, Maria discovers that her new boss is cold and aloof, and his seven children virtual automatons-at least, whenever the Captain is around. Otherwise, the kids are holy terrors, as evidenced by the fact that Maria is the latest in a long line of governesses. But Maria soon ingratiates herself with the children, especially oldest daughter Liesl (Charmian Carr), who is in love with teenaged messenger boy Rolf. As Maria herself begins to fall in love with the Captain, she rushes back to the Abbey so as not to complicate his impending marriage to a glamorous baroness (Eleanor Parker). But the children insist that Maria return, the Baroness steps out of the picture, and Maria and the Captain confirm their love in the song "Something Good." Unhappily, they return home from their honeymoon shortly after the Nazis march into Austria. Already, swastikas have been hung on the Von Trapp ancestral home, and Liesl's boyfriend Rolf has been indoctrinated in the "glories" of the Third Reich. The biggest blow occurs when Von Trapp is called back to active duty in the service of the Fuhrer. The Captain wants nothing to do with Nazism, and he begins making plans to take himself and his family out of Austria.

WHO ARE WE?
The MOVIECLIPS channel is the largest collection of licensed movie clips on the web. Here you will find unforgettable moments, scenes and lines from all your favorite films. Made by movie fans, for movie fans. 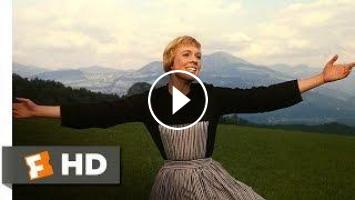