Michael Jackson's 14-minute short film "Thriller" revolutionized the music video genre forever. Hailed as the greatest music video of all time by MTV, VH1, Rolling Stone and others, "Thriller," directed by John Landis, is also the only music video selected to be included in the Library of Congress' prestigious National Film Registry.

Written by Rod Temperton
Produced by Quincy Jones for Quincy Jones Productions
From the album Thriller, released November 30, 1982
Released as a single January 23, 1984

Michael Jackson's short film for "Thriller" was the third of three short films produced for recordings from Thriller, which continues its reign as the biggest selling album of all time with worldwide sales in excess of 105 million as of June 1, 2016 and in December 2015 became the first ever album to be awarded triple diamond status (i.e.: sales in excess of 30 million) by the RIAA for US sales alone. The "Thriller" single reached No. 1 in four countries in 1984, topping the U.S. Billboard Hot Dance Club Play chart as well as charts in Spain, France and Belgium. The song peaked at No. 4 on the Billboard Hot 100, making Thriller the first album to feature seven Top 10 singles. The Recording Industry Association of America certified "Thriller" Gold and Platinum on December 4, 1989.

The groundbreaking short films for the Thriller album, starting with "Billie Jean," following up with "Beat It" and culminating with the epic, nearly 14-minute "Thriller," truly expanded the possibilities of "music video" as art form. "I wanted something that would glue you to the set, something you'd want to watch over and over," Michael wrote in his 1988 memoir Moonwalk. "I wanted to be a pioneer in this relatively new medium and make the best short music movies we could make."

In the short film's extended prologue, Michael's moonlit date with his girlfriend (played by model Ola Ray) is interrupted by his sudden transformation into a howling werewolf. While the "real" Michael and Ola, observing the scene in a movie theater, walk home from the their date, Michael teases her by singing the verses of "Thriller." 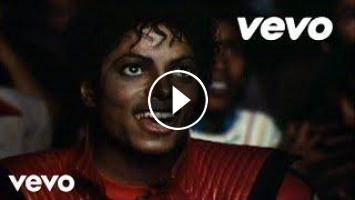