Lausanne, Switzerland, June 27, 2020 – Amit Gulia is optimistic that recent age-group achievements could help spark a renaissance in Indian volleyball.
Amit made his senior team debut in 2018, when India competed at the Asian Games in Jakarta, Indonesia. After that, his Asian Men’s U23 Championship performance earned him a spot in the senior team that won gold at the South Asian Championship in Nepal. He also saw action at the Tokyo Continental Olympic Qualification Tournament in China.

“In terms of medals, I have won a gold medal at the South Asian Games and for the first time in our history, we finished as runners-up at the Asian Men’s U23 Volleyball Championship
Amit has big dreams and hopes he can go some way to following in the steps of his idol, Olympic gold medallist and former world champion Giba of Brazil.

“My volleyball idol is Giba of Brazil,” he said. “I wish one day India will be able to participate in the Olympic Games. Volleyball has big potential in India. We have a lot of talented volleyball athletes.”

For now he is working on his own game and trying to become one of the country’s leading players.

“I am playing at a national club and I am trying to gain as many supporters as possible before moving up into the international arena. I am putting all my focus right now on elevating my skills and improving the quality of my game to be able to participate in more international events.” 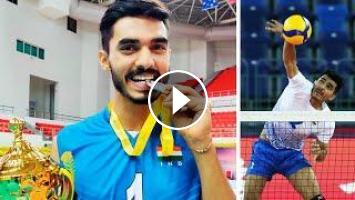